As an accomplished dancer, performer and choreographer, Jeremy, has performed in many shows, gala Balls and festivals in and around Sydney. He was chosen, along with his dance troupe, to choreograph a dance routine for a movie promotion in 2002.

Jeremy is a Salsa dance champion and has studied many forms of dance ranging from competition Ballroom dancing (winning the 1992 South Pacific Championships) through to Jazz, and Rock ’n Roll. He has a unique teaching style and has taught thousands of Sydneysiders to Salsa. As the director of Latin Fusion, Jeremy runs the largest Latin dance school in Sydney.


Some of his performances include: 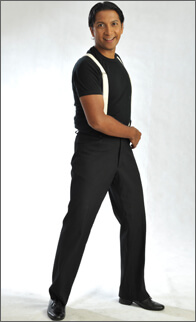 He has also appeared in numerous magazines and local newspapers and he is one of the most respected dance teachers in Sydney.

The classes are fun and energetic and are open from absolute beginners to advanced students – ideal for singles as well as couples. As his students say: “It’s not just a dance class, but a night out!”